Clarion Call Explodes for a 100 MILLION GUN MARCH on the Mall in Washington, DC … and everywhere else in America

From State of the Nation

An Open Letter to the Patriot Movement

First and foremost, this open letter is a clarion call for a peaceful, non-violent armed march on the nation’s capital.

The 2020 POTUS election has made it all too clear.

The Democrat Party stole the election from President Trump and the Left will do everything in their power to prevent a reversal of the bogus Biden win.

They will resort to the worst king of bolshevik violence to achieve their marxist goals.  Burning down the country would be a pleasure for them since they hate everything America stands for.

In the best case scenario for Trump, the courts could reverse the election result in all of the battleground states since that’s where the steal was done.  His true victory would then look something like this: 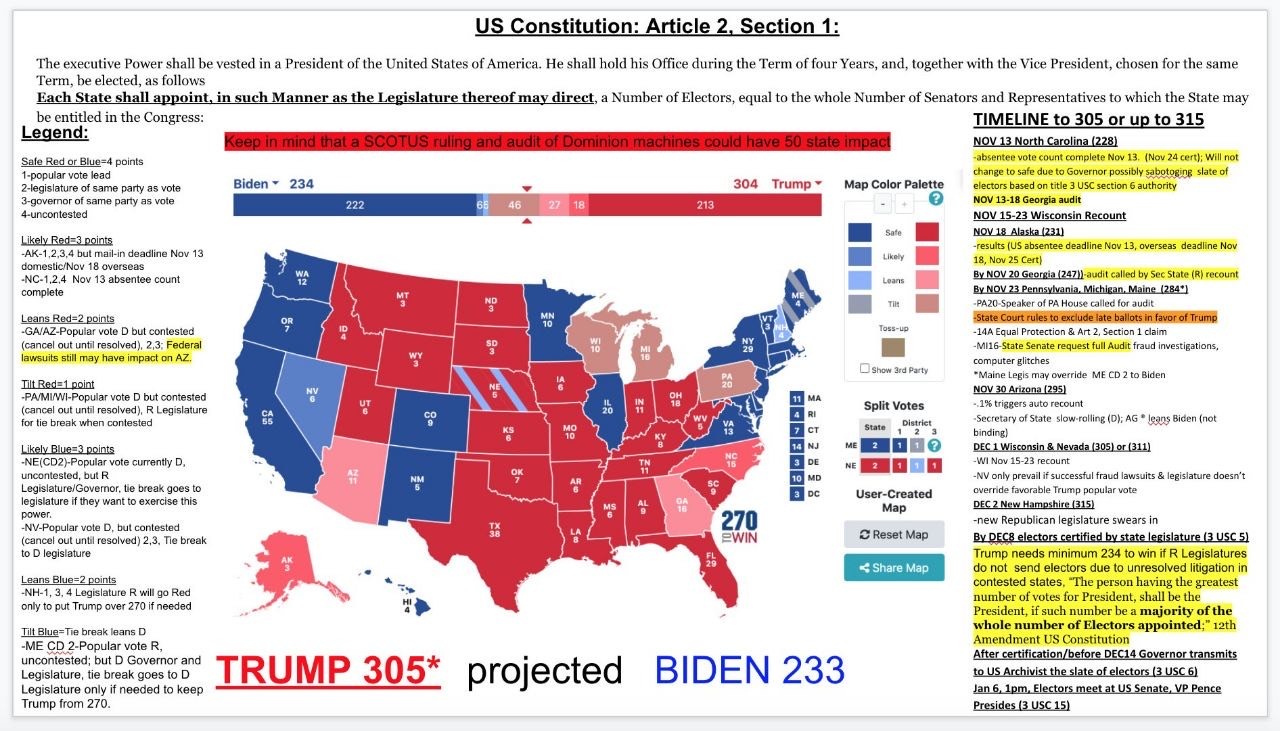 But even if that happens the Democrat–Deep State–Globalist machine is ready to make it hell in America as long as Trump sits in the Oval Office for another term.

In light of this grim reality, the Right must flex their muscles like never before.  Patriots everywhere need to unify and show some fang.

Folks need to know that we’re dealing with an incorrigible cabal of criminally insane psychopaths that will not stop until they have foisted their total tyranny on the American people.

Given the many communist criminal conspiracies run against the American Republic, it’s no wonder they are desperate to foment a Second Civil War.  How else to cover up their countless crime waves carried out over decades against the unaware populace.

The worst of the perps have been caught so many times in the midst of their crime sprees during Trump’s first term that they now feel they have no choice but to incarcerate the U.S. citizenry via OPERATION COVID-19.

It’s clear that Biden is their front man for that nation-destroying CORONAhoax  enterprise.  Hence, he and Harris cannot be allowed to steal this election.  They are both imposters who need to prosecuted to the fullest extent of the law.

Because of this rapidly climaxing situation, the Right is being called upon to support the President in a serious way.  This is really not his fight to fight, it’s ours—ALL OF OURS!

Patriots and Nationalists, Conservatives and Christians, Republicans and Independents, Tea Partiers and  Libertarians, Militiamen and Veterans, Hunters and Gun Owners are all being called to prove their mettle via this every-growing clarion call.

The United States of America has forever been called the “the land of the free and the home of the brave” so it’s time to walk our talk and strut our stuff LIKE NEVER BEFORE.

The Patriot Movement can show their strength by showing up on the National Mall in Washington, D.C.  Or, they can show up en masse at the local square in their closest city or town or village.

There’s only one condition for participating in this overwhelming nationwide tour of force.

COME ARMED TO THE HILT

The dark side in this final battle of this final war for control of the Republic only knows one thing—FORCE.  They will only respond appropriately to hard power.  You cannot negotiate or reason or ever be nice with them.

So, if you own any kind of a gun or firearm, be sure to bring them to the 100 MILLION GUN MARCH either in Washington, D.C. or to your city square.

The date and time of this Patriot Movement event is to be determined. So stay tuned to your favorite Alt Right site.

^This^ is the only thing that will stop this madness. If Trump does not move by the 6th..... all we have left is each other and our guns.

0
^This^ is the only thing that will stop this madness. If Trump does not move by the 6th..... all we have left is each other and our guns.
Cancel Update Comment

State of the Nation